“Børge Birch is the best art dealer in the world!”
Pierre Alechinsky

This statement appears on two original prints by Pierre Alechinsky, given to his friend Børge Birch on the day of his 70th birthday. Alechinsky and Børge Birch had been life-long friends, beginning with Alechinsky’s first of many solo exhibitions at Galerie Birch in 1964.

All the works made for this exhibition are painted in Denmark – all of them oil on canvas. In 1982, celebrating their 40 years of partnership, Børge Birch creates a very special exhibition with 24 ink and watercolour drawings, painted on original vintage Flora Danica prints. 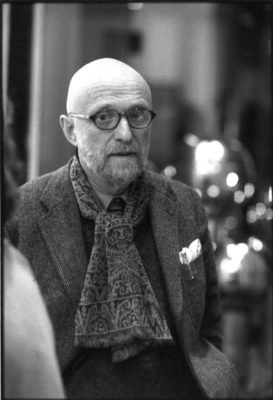 In 1948, Pierre Alechinsky graduates from L’École Nationale Supérieure d ́Architecture et des Arts Decoratifs in Bruxelles, where he specialises in typography and book illustration. After graduating, he decides to follow his vocation as a painter.

Alechinsky is only 21 years old when he exhibits at La Fin Moyens in Paris. Here he meets Christian Dotremont and is introduced to Asger Jorn, who invites him to join the CoBrA group.

Alechinsky’s first exhibition in Denmark is with the group Spiralen, at 23 years of age. Here he siezes the chance to visit the CoBrA exhibition at Den FrieCentre of Contemporary Art, where Carl-Henning Pedersen’s poetic musings make a profound impression.

Between 1984-1987, Pierre Alechinsky teaches at L’École Nationale Supérieure des Beaux-Arts in Paris, as a professor in the art of painting.

In 2007 Alechinsky’s 80th birthday is celebrated with an extensive retrospective exhibition at the Musées des Beaux Arts in Bruxelles, covering over 60 years of his work.

A SPONTANEOUS AND STRINGENT STYLE

Pierre Alechinsky’s extensive body of work illustrates an extremely disciplined approach. The artistic creation is both spontaneous and stringent, made possible by mastering the various elements of each media. The spontaneous is the ideal of artistic practice, exalted by both the Surrealists and CoBrA. With Alechinsky, the spontaneous expression arises by way of a laborious processing and refinement of movement. Through this method, inspired by surrealist automatic writing, he allows abstract motifs to transform into recognisable figures (and vice versa).

The background for this spontaneous expression is his in-depth knowledge of colour. His preference focusing ink and watercolours says volumes about Alechinsky and his views on painting. With these tools, he can paint freely with a light hand, alternately indulging in large broad strokes. The process leaves visible traces over the entire canvas, and the viewer can clearly feel the presence of inspiration.

Inspired by his meeting with the Chinese artist Walasse Ting (who he first meets in Paris and again in New York many years later) Alechinsky travels to the East, in order to explore his fascination with Japanese calligraphy. Here he learns to master ancient techniques, which become crucial influence on his own style. The method consists of laying out paper on the floor, which he carefully works on then bends over the canvas. Alechinsky uses his favorite goat-hair brush, bought on his first visit in Japan in 1955. Even to this day, Alechinsky uses this precious brush.

At times, Alechinsky almost only works with ink and paper, where the completed work is mounted on canvas. The technical precision necessary for this method is enhanced with creative arabesques. Alechinsky begins to include and re-use old newspapers, invoices as well as Flora Danica-illustrations and engravings. With age, the paper achieves a particular structure specially suited for ink and watercolour. The result is a light style imbued with decorative elegance.

Together with Dotremont and Reinhoud, Alechinsky plays an essential part of CoBrA’s Belgian segment. With his exceptional organisational skills, he quickly sets up the meeting place at ‘Les Ateliers du Marais’. The studio is used as an artistic collective as well as a research centre for the CoBrA group.

Through their artistic and intellectual collaborations, lasting friendships are formed, especially between Alechinsky and Asger Jorn, whom he deeply admires. In 1995, Alechinsky completed the massive piece Pensée de Pinceau (Thoughts of the Paintbrush), a large wall comprised of ceramic tiles at Silkeborg Art Museum as a tribute to his old friend Jorn.

Whilst in Paris, Alechinsky shares a studio with Belgian sculptor Reinhoud where they work in artistic symbiosis. Reinhoud’s sculptures contain a touch of the instability and humour about life. During this time, one can see many common references to each other’s work. There are both monsters and fantastical beings, and even Reinhoud’s discarded orange peels transform into serpents in Alechinsky’s imagery.

In 1962, Alechinsky has his first exhibition in New York, working alternately from Walasse Ting’s studio and the iconic Chelsea Hotel. At Ting’s suggestion, Alechinsky switches his oils paints for watercolours and permanently moves to New York.

From here on, he begins to frame his works with characteristic margins – often consisting of less detailed figures. These margins can be traced to Alechinsky’s artistic roots in printing and illustration. The term Marginalia covers notes, resumés, comments as well as amendments penned in the margin of books. Following the natural movement of vision, the eyes seek towards the edges of the painting, finding a series of smaller motifs. The title of the Guggenheim-exhibition Margin and Centre refers to this shifting vision, now considered unique in Alechinsky’s style.

In the catalogue Galerie Birch is mentioned as having contributed to the exhibition. Career-wise Alechinsky is at his highest point, the exhibit travelling from New York to Kunstverein Hannover, Musèes Royaux des Beaux-Arts de Belgigue and Arte Moderne in Bruxelles.

”Beyond the frame there is . . . well, all the rest! The roving hordes, the outside world, so powerful when you compare it to a small rectangle of
paper or canvas. I sense then how urgent it is, not only to concentrate on the composition of the rectangle itself, but also on that of its frontiers on the margins.”

REPRSENTED AT THE FOLLOWING INTERNATIONAL MUSEUMS