In the 1950s his imagery evolves from figuration to abstraction. Meeting artists such as Pierre Soulages, Maurice Esteve and Gerard Schnieder becomes vital for this development. In 1956 he establishes contact with Galerie Claude Bernard in Paris, where he has his first solo exhibition in May of 1958.

In 1959 Marfaing is awarded the Jeune Peinture for young, promising artists. In 1962 he is invited to represent France at the Venice Biennale together with Serge Poliakoff, Jean Messagier and Alfred Manessier. In 1964 he joins Albert Bitran, Jacques Doucet, Roger Edgar Gillet, Bengt Lindström and Yasse Tabuchi among John Pollack’s artists at Galerie Ariel. Throughout the 70s he exhibits in both Paris and outside Europe.

Marfaing primarily works with oil on canvas. His sculptures are often characterised by violent gestures, which still possess a rigorous structure. From 1971 he experiments with the technique of using acrylics on paper. Often the entire canvas would be covered by a singular dark colour with only sparse glimpses of brightness, thereby creating a dramatic rhythm in the interaction between dark and light.

The Impressionists banned the use of the colour black it in their work, saying that the colour did not exist in nature. For this same reason, André Marfaing rarely used this colour. Within the scope of French Modernism, Marfaing mainly went his own way. 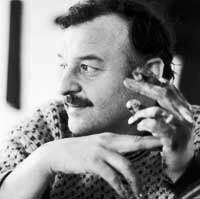 André Marfaing first begins his career in Law, for which he acquires a license in his hometown of Toulouse. However his fascination for painting moves him to give up his studies and move to Paris to become an artist.