In 1979 in his preface to the exhibition catalogue Børge Birch writes that, for the second time in the history of Galerie Birch, he has the pleasure of introducing the world-known name Pierre Soulages to the Danish art scene. The exhibitions in 1951 and 1979 establishes the artist and affords him a recognition that he still enjoys to this day. From the following quotation it is clear to see that a mutual professional respect had developed into a warm friendship between the artist and his gallerist: “During the final negotiations about the practical details considering the Soulages exhibition with Galerie de France in Paris – I asked who was assigned to write the preface to the catalogue in connection with the exhibition in Copenhagen.”  “That person should be you” was the answer.

That was decided by Soulages himself as a kind gesture to Børge Birch – the art dealer who in 1951 created a remarkable and of course well earned success for the young Pierre Soulages in Copenhagen. “I felt flattered, honoured and nervous – in exactly that order. And at the same time, grateful. (…).Soulages was as bright and kind as the darkness of the photographers and gloomy impressions of the person and his works. Not to let you be confused by this preface dear reader, but allow me to mix the darkness with light, understanding with missed opportunity and visibility with lack of vision.”

Soulages is from early on, inspired by Roman art and history. During World War II he worked as a winemaker and thereby avoided to participate in the war in Germany. Soulages takes up painting from an early age, and at the age of 18, during a short stay in Paris, he experiences an exhibition with Cézanne and Picasso which in a way becomes an epiphany for him.

As a 20 year old he finds himself in Montpellier, where he is accepted to the Ecolé Nationale des Beaux-Arts, but chooses to decline before starting. In 1946 he opens a studio in Paris and thereafter dedicates all of his time to painting. Here he creates paintings for his first exhibition at Salon des Indépendants in 1947, and from here his adventure as an artist begins. 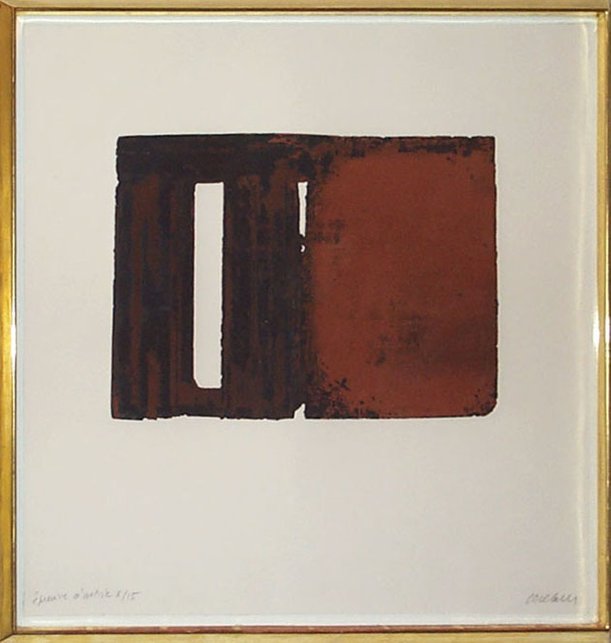 BLACK AND MONOCHROME - INSPIRATION FROM ABROAD

In 1957 Soulages meets several of the contemporary American artists that later will have an influence on his artistic expression. Examples are artists as Wilhelm de Kooning, Mark Rothko and Robert Motherwell. One year later, Soulages also gains inspiration from Japanese calligraphy art during his trips to Japan, Hong Kong, Cambodia and Thailand. Soulages lets the colour black dominate his painting.

His paintings are different, abstract and dark and quickly becomes a success which gets Soulages noticed all across Europa, USA and the Middle East. In 1948 he participates in several exhibitions in Paris and Europe, including the “Französische abstrakte malerei” in several German museums, followed by more exhibitions in New York, Sao Paulo and Copenhagen from 1949 to 1952. Soulages will also become known for his outstanding etchings, which he at first starts making in the Lacouriére workshop. The painting as medium insists on a refined simplicity, which also inspires the artist.

Soulages paintings can be thought of as mono-pigmentations, the foundations of which are the reflections that natural or artificial light creates when it shines on the different surfaces and their qualities in the black pigmentation. Soulages gains great recognition for his monochrome black paintings and also gets the nick-name “The painter of black”. Soulages is interested in investigating the colour, or what we from his own words can translate into “negative colour”. The black colour is for Soulages; “(…) both a colour and a non-colour. When light is reflected on black, it transforms and transmutes it. It opens up a mental field all of its own”.

By choosing a negative colour, he can investigate our fundamental perception of colour itself: light. And the colour will always look different, depending on how much light it is exposed to. The light is seen upon a blank surface, which reflects it and absorbs other nuances, or by creating a structured surface that shimmers or highlights the distinction between the light and the dark.

Hereby Soulages transforms the colour black, which now is not merely black, but in a constant transformation with the changing light. The black pigmentation becomes alive, and the colour undertakes a development from the dark to the light.

The artist Mogens Andersen writes down some of his reflections on Soulages’ painting in the exhibition catalogue to his exhibition on Charlottenborg in 1982:

“Soulages is not the sole owner of the colour black, but he has by his way of using it, left a mark never seen before, and has conjured worlds that are still undefinable.”

Soulages is the first living artist who is invited to exhibit at the Hermitage Museum in St. Petersburg and later at the Tretyakov Gallery of Moscow (2001).