William Sweetlove lives and works in Koksijde, Belgium and is one of the most celebrated artists within the Flemish art scene. Through his unique imagination he tries to challenge the viewer’s ideas about art, culture and our physical surroundings.

Sweetlove’s career begins in the early 1970s, where he finds inspiration in the avant-garde works of Joseph Bueys. Bueys’ style carries on the work where many avant-garde artists such as Marcel Duchamp left off. Much like Duchamp and Bueys, Sweetlove works with the object as a conceptual idea. His fascination with synthetic materials can already be seen in early works in which he experiments with various materials in an ironic yet poetic way.

In 2001, Sweetlove joins a group of artists from Northern Italy calling themselves The Cracking Art Group. The group currently consists of six international artists; Renzo Nucara, Carlo Rizzetti, Marco Veronese, Alex Angi, Kicco and William Sweetlove. The group formed in Milan in 1983, and has since created numerous installations in both Europe and the U.S.A. Inspired by dadaism and pop art, the group members engage in an interesting collaboration. Together with Sweetlove, they create a world filled with gigantic animals, colourful dogs and pigs outfitted with rubber boots and water bottles. 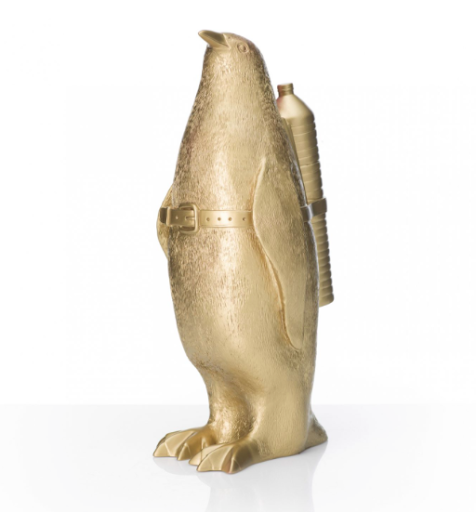 Large birds, rabbits and snails made of resin are placed in unusual venues – parks, famous landmarks and the urban space in general. The sculptures are a benevolent presence, and the audience readily interacts with the works. Tourists take photos as children play with and amongst the sculptures. The colourful animals invite the viewer to reevaluate their view on public and private space, and encourage curiosity and play. The group’s oeuvre can be seen as both installation and performance, in which the element of surprise plays an integral role. Above all, the mindset of the viewer is being challenged.

Underlying the group’s humorous expression, it is their intent to promote a strong attitude towards our society and environment. The name of the group underlines the intent to act as a collective and innovative break with traditional art history. Their latest project REgeneration Art Project places giant snails within traditional landmarks all over the world, and deals with topics such as cloning and recycling.

Sweetlove’s ecological message is based on an exposure of human kind’s greed, which is threatening the vital balance of our planet. The play between ironic vision and poetic hopefulness forms an intriguing string of experiments.

These sculptures are solely made from environment-friendly materials such as recycled plastics and resin, in order to underline the contrast between depicted nature and artificial reality – the organic material versus the synthetic. The snails symbolise nature, created in synthetic materials which cause a minimal impact on the environment. The viewer is encouraged to contemplate themes such as recycling, and its positive effect on the environment. Simultaneously, the absurd as an element in itself is prevalent as the sculptures invade public spaces. Their presence makes us reconsider how we use and move within public spaces. The snails have attracted international attention, and have started to appear suddenly all over the world, in order to increase our environmental awareness.

William Sweetlove’s first exhibition in Galerie Birch took place in 2011, at the show “4 x Pop Kopenhagen”. His most recent exhibitions have taken place in Miami and Uruguay.