In 1940, Yoshio Nakajima was born in the village of Kawamoto located in Saitama prefecture, some 100 kilometres from Tokyo, where his family have been farmers for over three hundred years. The family farm is situated between Buddhist temple and Shinto shrine, which is of great symbolic value.

At only three years of age, Yoshio Nakajima begins to take an interest in calligraphy. Despite believing he was destined to devote his life to the monastery, his parents encouraged Yoshio to follow his creative interests.

In 1954, at the age of fourteen, Yoshio Nakajima ran away from home, making his way to Tokyo. He had made up his mind to become an artist. After six months of hardship Yoshio finally gets a job at a small metal works so that he could afford to attend night school. Yoshio soon has his artistic debut with a solo exhibition, where he becomes acquainted with poet and Dadaist, Dada Kahn. They become lifelong friends.

In 1964, Yoshio Nakajima is offered the opportunity to study in Europe. He hitchhikes his way across the entire Asian continent until he reaches his destination; Rotterdam. Here, he studies at the Academy of Fine Art and meets several of the leading artists in Europe: Asger Jorn, Joseph Beuys, Wolf Vostell, Robert Jasper Grootveld, Jean-Jacques Lebel, John Cage, Allan Kaprow, Robert Rauschenberg, Tajiri, Kudo and Simon Vinkenoog. 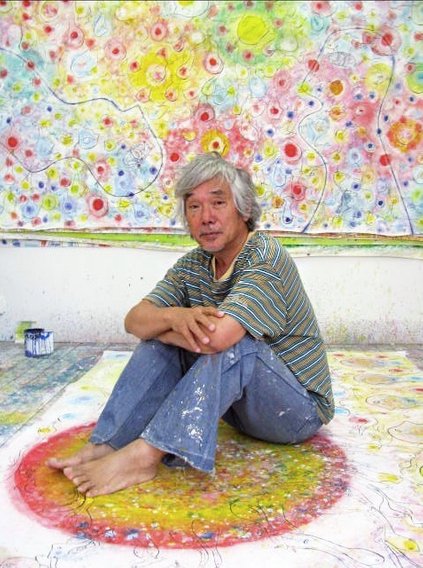 Invited to Hundertwasser’s studio, Yoshio Nakajima meets Lucio Fontana in Venice and assists Robert Rauschenberg in a happening during the Venice Biennial. At Galleri 04 outside Rotterdam Nakajima has his first solo show in Europe.

In 1965 Nakajima moves to Antwerp where he is accepted as a student on a five year scholarship at the Royal Academy. He lives for several months in the old home of the poet Paul van Ostaijen. Together with Panamarenko and Hugo Heyrman he founds the avantgarde art magazine “Happening News”. Hitch-hiking across West Germany he then makes his way to Copenhagen where he finds temporary work as a screen printer.

In 1989, in connection with the Situationist exhibition at Pompidou Centre, Yoshio Nakajima receives the Asger Jorn’s Drakabygget Award. Later that year he participates with a one-man exhibition at the Gothenburg International Art Fair. In 1992, Medical Art University honours Yoshio Nakajima with the first museum named after him in Saitama, Japan, his home prefecture. Gallery. Yoshio participates with a one-man exhibition at Sundsvall International Art Fair.

Known in Japan as “The Son of the Sun”, Yoshio Nakajima is represented within 35 art museums around the world. He has participated in more than 500 happenings with Rauschenberg, Yoko Ono, John Cage and Jørgen Nash. Since 1966 he has resided in Gothenburg, Sweden.