Børge Birch started a close friendship with Asger Jorn and by 1930, Birch was already selling Jorn’s work. In his art journal in 1959 Børge Birch writes:

“In all modesty. I think he is the most expensive of them all. But it sounds a little silly by a Dane, you think well just that I like best Hamburger steak with fried eggs – genuine Danish Food. BUT he is world class. Buy everything you can get, now“.

And further: “(…) I consider Jorn recent pictures to be top of his production. I feel 100 percent sure, even if it goes against the Danish sense (…) if Jorn had continued to paint, as he did from 1944 to 1952, then he never would have become world famous. I feel that I have been face to face with one of the greats of our time. “ 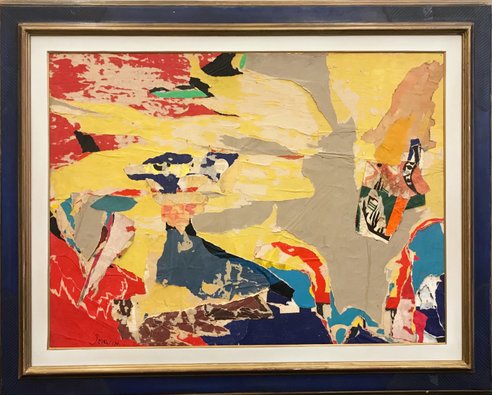 ”GO TO HELL BASTARD – STOP – REFUSE PRIZE – STOP – NEVER ASKED FOR IT – STOP – AGAINST ALL DECENCY MIX ARTIST AGAINST HIS WILL IN YOUR PUBLICITY – STOP – I WANT PUBLIC CONFIRMATION NOT TO HAVE PARTICIPATED IN YOUR RIDICULOUS GAME.”

Asger Jorn is one of the greatest post-war Danish artists whose paintings have made their mark on both the Danish and international art scene. In the late 1950s Asger Jorn becomes internationally known as both an artist and pioneer, whose generous and unselfish spirit is the starting point for a wide range of artist communities. The international artist network that occurs around Jorn is the foundation of the artists who are presented today at Galerie Birch.

START OF THE CoBrA MOVEMENT

Asger Jorn was already considered a central figure in the Danish art scene during the inter-war period . He stands behind the periodical Helhesten (1941-44), which was the unifying body for the Harvesting exhibition of abstract-expressionist painters, among other counts Egill Jacobsen and Carl-Henning Pedersen . The journal also became a model for the later CoBrA movement that serves as a basis for cooperation of the international association of artists. Together with the Belgian artist Christian Dotremont, also represented at Galerie Birch, Asger Jorn helped start the CoBrA movement in 1948 in Paris. The group exists until 1951 and, despite its’ short life, it had a decisive influence on the development of future spontaneous abstract art.

The spontaneous abstraction combined with an interest in children’s drawing (especially Paul Klee’s painting acts model) starts when Constant, Appel and Corneille form Nederlandse Experimentele Groep. The group constitutes later the Dutch branch of the CoBrA group. They want to create a limitless experimental freedom in international cooperation and sought no real common style. Jorn has a central role in the development of the spontaneous-abstract art from the late 1930s and his paintings will find funny and peculiar fantasy creatures in an abstract figurative world. The spontaneous abstract painting leaves it unconscious and untamed appear in the form of motifs and especially in the very way they painted. In Jorn’s paintings there is a process of liberation of the painting so it is not tied in colour and form, but instead will reach a picturesque spontaneity.

In addition, Jorn was inspired by primitive art, children’s drawings and the Old Norse world. The paintings as part of the rebellion CoBrA movement had a socio-political dimension, and Jorn’s commitment to the Situationists along with Guy Debord and Jacqueline de Jong put a mark on his works. Situationism marks a showdown with high culture and all conventions by focusing on the individual situation in order to seek the distinction between artist and audience and between life and art. Jorn’s political commitment was reflected, for example in the large painting “Stalingrad, the Non-Place, or the Mad Laughter of Courage” (1957-60 and 1967-72), which today hangs in the Museum Jorn in Silkeborg.

Jorn’s paintings are also known by the often ambiguous titles that reflect his view of the world. Like many other artists Jorn at this time is active in the Communist Party, and his radical positions are also against the lofty and hypocritical art world. Jorn is a living man who selflessly and openly takes the whole world as his playground and his international format is in sharp contrast to the lofty institutions such as the petite-bourgeois. In perhaps his most significant showdown with the established art world, he rejects to exhibit as Denmark’s representative at the Venice Biennale in 1964. That same year, he rejects Eckersbergs medal and Guggenheim prize, where he sends a defiant telegraph to the Guggenheim Director, which reads:

The opening or an ‘art stronghold’ in 1958 in Louisiana motivates Jorn to create an alternative. In line with his social view of art, Jorn begins thus bringing together the works of the abstract-expressionist artists to Museum Jorn in Silkeborg, whose collection of international modern art today stands as one of the world’s finest and most extensive. The collection shows Jorn’s international importance and makes him simultaneously the largest Danish patron in recent times.

In 1953 Jorn leaves Denmark and begins a huge travel expedition which allows him to grow within international communities. In 1949 Jorn exhibits along with Joan Miro and Jackson Pollock in “Modern Art” at the Stedelijk Museum in Amsterdam and these exhibitions can be considered as an artistic breakthrough. The galleries are flocking to buy his works at high prices, but Jorn doesn’t care about it, and earnings simply act as fuel for his many future projects. These include the “Scandinavian Institute of Comparative Vandalism” (SISV) and the literary work “10,000 Years of Nordic Folk Art”. Jorn published an extensive number of articles and books on art theory.

In 1964 Jorn participated in a number of international art exhibitions and his first retrospective exhibitions took place in Basel, Amsterdam and Louisiana. The English university lecturer and art collector Guy Atkins, who Jorn met in London in 1956, collected material for a complete list of Jorn’s paintings and even though Asger Jorn is best known for his oil paintings, he also produced an unknown number of pottery, lithographic prints, woodcuts, etchings, drawings, watercolours and gouaches. The collection totals more than 700 graphic works which can for the most part be seen in the Jorn German gallery, Galerie van de Loo.

In addition, Jorn was known for his collages and décollages created in the years 1964-1972 in connection with the student riots in Paris, where Jorn became aware of the visual strength of the poster. The posters hung in thick layers in the Parisian streets in the areas around the Marais and Montparnasse where Jorn along with lithographer Peter Bramsen collected and transported them to the studio. Jorn the worked on them by reducing the amount of paper. Hence the term ‘decollage’, which means acting to remove parts from the whole and not to apply as in a ‘collage’. There are a dozen décollages, with several of them being created in 1971, only two years before Jorn’s death.

REPRESENTED AT THE FOLLOWTING MUSEUMS IN DENMARK