THE YOUNGEST OF TWO

Tróndur Patursson was born in 1944 in the town Kirkjubøur on the Faroe Islands. He is the youngest of twin boys, his brother Potl was born fractionally before him – a detail that will become of crucial importance in the shaping of Tróndurs life and artistic career. His father Jóannes Patursson was a very important man in the farming community, and the inheritance rules dictated that the oldest son would be sole heir of the land, the farm and ought to be head of the family. Had this been Tróndur’s destiny, he perhaps wouldn’t have become who he is today: counted as one of the most important living artists on the Faroe Islands with exhibitions all over the world and recipient of the most prestigious cultural award in 2014.

“Like people, nature has an aura – a radiation – which I want to take in and express in my art.” 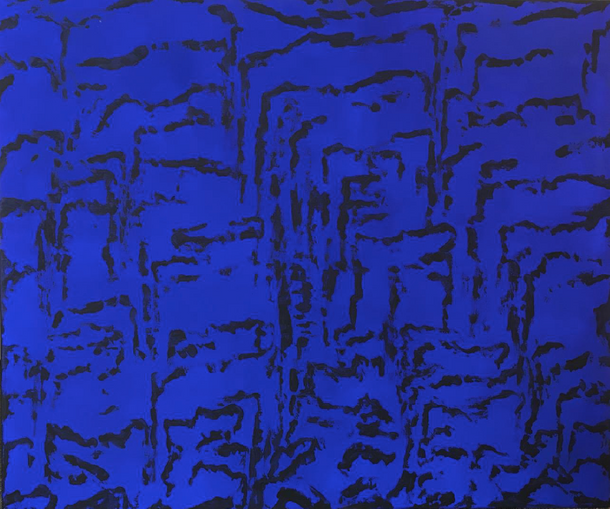 ONE HUNDRED AND SIX DAYS AT SEA

Tróndur Patursson’s direction took course straight towards the sea. His art and views on the purpose of art has very much been shaped by his experiences of nature and his time at sea. From the year of 1959 he spends five years on different cargo ships and fishing boats. Before his departure he had attended art school and was drawn to art as a way of living. A series of events in his family and personal life sets him a little back in his pursuit of a career as an artist.

However, in Norway he meets the artist Ståle Kyllingstad who encourages Tróndur to continue with his artistic career. In 1969 he is accepted to the Oslo Academy of Royal Arts. In 1976 he seeks a great adventure and says yes to go on what will later be known as “The Brendan Voyage” together with the Irish adventurer Tim Severin. The foundation of their adventure at sea is wanting to test an old myth: a myth based on stories from the medieval Irish monk and saint, St. Brendan, who had travelled from Ireland via The Faroe islands and Iceland to Newfoundland in a leather boat made by St Brendan himself. Tróndur used the raw and wild nature experience from the trip to attain inspiration for his paintings and drawings. In his works we see organic shapes, abstract nature motifs and and a passionate exploration of colour.

into English it means “The Blue Deep”) which was exhibited at Randers Kunstmuseum in the year 2000. The blue and monochrome colour has a breathtaking and intense expression – it is Tróndur Patursson’s true and unspoiled outlet for that almost cosmos-like deepness of the sea that his own body and soul experienced.

THE LONG WAY TO GLASS

It’s not only painting as an artistic way of expression that will come to characterise Tróndur Patursson’s career as an artist. In 1986 he is given the task to decorate the new shopping mall in Torshavn. This was the starting point of the use of an entirely new material – glass. The legendary Per Steen Hebsgaaard’s glass workshop would come to play a significant role in the process. Patursson visited the workshop to be inspired, which led to a long and fruitful cooperation between Per Steen Hebsgaard and Tróndur Patursson. The project in Torshavn was extremely ambitious. For the decoration Patursson needed no less than 145 square metres of glass, and Hebsgaard has also later stated that the Torshavn decoration was one of the projects that had taught him the most. The result was outstanding: two twelve meter high glass sculptures designed to contain running water, and a ceiling made of beautiful coloured stained glass. Since then Tróndur has worked with glass in different ways – as stained glass and sculptures, and has used them to make countless decoration tasks. An example of this is his exhibition in 2013 at the John F. Kennedy Center of Performing Arts. Ninety of Tróndur’s patented stained glass birds found their way norges casino to Washington and were a part of the exhibition “Nordic Cool.”

Per Steen Hebsgaard’s glass workshop would later also be the link between the meeting of Børge Birch and Tróndur Patursson. Børge was well-known with the workshop as numerous of the gallery’s artists had worked together with Per Steen Hebsgaard, amongst others Jens Birkemose, Robert Jacobsen, Carl-Henning Pedersen, Arne Hauge Sørensen and Jan Sivertsen.

Børge Birch was intrigued and interested in the way that Tróndur chose to work with glass. His work process and handling of the material was spontaneous, wild and intuitive just as many of the artists that Børge Birch was involved with from the CoBrA group. This hectic, almost action painting approach to a material so fragile as glass, and the magnificent and artistic compositions should, would and did find its way to the walls of Galerie Birch.