EXPRESSIVE WORKS WITH PEOPLE AT THE CENTRE

The French artist Jean Messagier is raised in the vibrating art metropolis of Paris, and the rural France-Comté, where he carries out his first sketches and watercolour paintings.

Messagier’s first solo-exhibition takes place in a castle in Montbéliard in 1943. From 1960 he starts to exhibit outside France, and participates in the big international art events as a spokesperson for a new direction in French painting. He is involved in establishing lyrical abstraction and stands out as one of a kind, who in a unique way ensouls nature in his paintings – but denies to be defined as an artist.

”Dear Jean Messagier, with these paintings you unlock our senses, make us see the light in the blue sky, hear the insects in the green grass, enjoy the scent of the flowers and feel our presence in your paintings.” 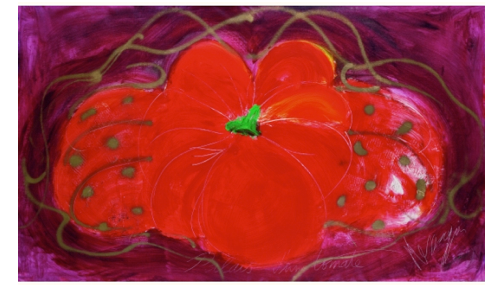 Messagier’s primary source of inspiration is nature and his organically characteristic expression and unique compositions of muted and clear colours shows a very sensitive interpretation of natural phenomenas and the changing seasons’ individual characters. Messagier often makes his colours so bright that they almost seem transparent and uses wide brushstrokes to paint his impressions of France-Comté’s landscapes.

His artworks appear as abstract, spontaneous and chaotic, but at the same time extremely well composed, as they were carefully planned. Once you have seen an artwork by Messagier, you will always be able to recognise his mysteriously intriguing and floating figures.

Early on in his career, Messagier becomes inspired by Paul Klee and the art critic Charles Estienne, who as early as in 1950 opposes the periods geometrical abstraction and becomes the spokesperson for a more liberate and lyrical imagery.

In the years between 1945 and 1949 Messagier is a student at the art school l’École Nationale Supérieure Des Arts Décoratifs and is especially fascinated by Pablo Picasso, André Masson and his teacher Francis Desnoyers. Later in his career the American Pop Art inspires him.

THE ESTABLISHMENT OF A NEW ARTISTIC MOVEMENT

Jean Messagier is a key figure in the establishment of La Nouvelle École de Paris and the so-called Art Informel, which is considered as the European equivalent of the American abstract expressionism (cf. Jackson Pollock). The artistic philosophy behind this direction points towards the intuitive, spontaneous and uncontrolled expression, which connects it to the CoBrA movement. However, Messagier has never accepted or related himself to a specific art direction, just like he doesn’t find it important to distinguish between the abstract and the figurative. The art historian and author of the book “Jean Messagier”, Georgina Oliver, writes: “Within his nature-oriented grand design all contradictions and paradoxes are acceptable.”

In 1960 Børge Birch meets Jean Messagier during a visit at Galerie Schoeller in Paris, which exhibits Messagier’s artworks. The two of them quickly become friends, and this is the beginning of a series of exhibitions in Galerie Birch.

Messagier’s colourful depictions of nature awakens Birch’s fascination of landscape painting, which otherwise had receded into the background because of the young CoBrA painters. In the catalogue at Messagier’s exhibition at the gallery in 1977, Børge Birch poetically speaks of his fascination of Messagier’s artworks:

“It has occurred to me now, what before tended to stop me, but now has me involved with Jean Messagier’s paintings. It is his very sensitive relationship with the sky, the earth, the wind and weather… An addiction, a love and a great knowledge of the variability of nature. (…) My big admiration for Oluf Høst and his painting was naturally paused during my work for the “new” and abstract CoBrA people. I actually thought I was through with the easy-recognisable landscape-painting, but things don’t always work out the way you think they will – standing in front of Jean Messagier’s colourful paintings I am again the same astonished admirer of nature, the blueness of the sky, the green grass, the gold ocher of the corn and the violet shades.”