Nes Lerpa’s surname gives the impression that we are here dealing with a man who comes from more northern latitudes than our own. But this is not the case – Nes Lerpa was born in Copenhagen in 1942, and as the son of the painter Ejner R. Kragh, has had art and the artistic process incorporated in his life from his early childhood. As early as in 1960 Nes Lerpa made his artistic debut, and during his career he develops and expresses a unique artistic nerve, which not only places itself in a very different direction from his father’s art, but also situates itself far from Denmark and opposes many of the established societal norms. 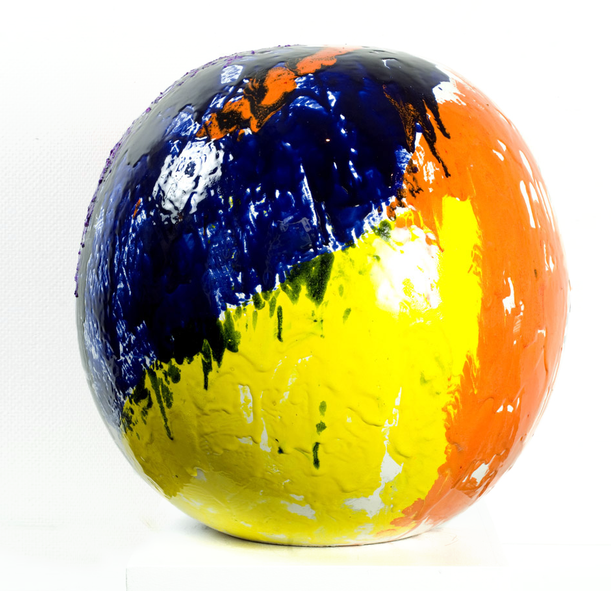 FROM THE GLOBAL TO THE LOCAL

With exhibitions in almost every country from The Netherlands to Taiwan, Lerpa can be defined as an artistic globetrotter. Travel also becomes a fundamental inspirational source. Lerpa’s artistic production has its outlet from two locations; his studio and home in Asserbo in Denmark, and from the mountains behind Piacenza in the north of Italy. Besides these two residencies, Lerpa has travelled around most of the world, staying for long periods of time in Spain, France, England, Italy, Lapland, Morocco and India.

Despite this, Lerpa has not forgotten about the small and local aspects of life. His gleaming involvement with the community is clear proof of this. His engagement with projects such as Christiania’s freedom and the political situation in Tibet should be noted but must not overlook cases such as that of the nature reserve ”Melby Overdrev” that is close to Lerpa’s studio in Asserbo. Together with a group of friends, Lerpa fought to protect the reserves beautiful environment – a natural habitat that in many ways creates the background for Lerpa’s dreamy, breath-taking and sensitive expression. Just as natures sometimes unleashed an unpredictable temper, Lerpa also works in different ways – sometimes furious and other times in a gentle manner. No matter what, he always creates his artworks with great passion which brings with it an unique honesty and creative desire that sometimes can be hard to control and contain, as we for example see in Lerpa’s use of enormous canvasses.

Lerpa’s sensuous approach to art and his passionate way of working is also visible in the great variety in ways of expression that he uses. In Galerie Birch we have a selection of mainly Lerpa’s ceramic artworks, but his different forms of expression and artistic interactions range all the way from music and scenography to architecture. In the concert-exhibition that took place at Palazzo Visconti in Italy, the different arts were united as a whole, with the intention to create a space in which a possibility to contemplate with the artworks is created. Lerpa’s poetic handling of the visual is also shown in his own reflections about the project:

“Time travel, the forces of the past, myth, the journey in the palace that represents all palaces, their greatness and heaviness stand before a never-ending journey – a journey without time, without limits, without boundaries, without conditions.”

A sense of spirituality and spontaneity goes hand in hand with deep and thoughtful reflections on life and the surrounding world – painted, formed and materialised in Lerpa’s aesthetic artworks.

CoBrA -FROM INSPIRATION TO LIBERATION

Nes Lerpa’s colourful ceramics are produced at two world famous pottery workshops: Ceramica Ibis situated north of Varese in Portugal, and Ceramiche San Giorgo in Albissola, Italy. The latter is the same pottery workshop where Asger Jorn once worked and produced his ceramic artworks, but this is not the only things that connects the two artists. The liberation from all national borders is also a way of living and working for both artists, as well as the interest in expressing themselves through different manners of expression. Lerpa’s motifs have likewise changed to consist of abstract expressionistic shapes, with a great concentration on the use of colour. An artistic nerve which for both artists is super-sensitive and which leaves behind the most intriguing artworks of the impressions they are exposed to.

During the years from 1985 to 1992 Lerpa together with a group of colleagues edited and published the magazine “ Il Colpo dei Barbari” (in English, ‘The stroke of the Barbarian’) which can be seen in connection with Asger Jorn and his involvement with the magazine “Helhesten.” Just as the people involved in the CoBrA movement had to fight to share their thoughts and ideas of an alternative society in the gloomy post-war period, Lerpa is also in war against the dominating constructions of society. In an aesthetic manner, he reflects about and opposes the superficial and consumer-oriented way of living. It is not enough for him to stop and dwell in the same conceptions of the CoBrA movement. Lerpa is fully aware that he has to go beyond this and relate to the current conditions of society, which is characterised by other conditions than previously. With colour, sensuality and the notions of harmony and chaos as his focal points, Lerpa shows us how an alternate world could look like. His visionary and spontaneous so-called “psykomaleri” does not show any signs of fear – it without compromise stares straight in the eye of its viewer, where it tentatively both gives answers and asks questions.