Christian Dotremont‘s passion for words, images and art was forged early on, being born into a family deeply engaged with the editing and publishing of art journals. His inquisitiveness and interest in creating works of art through words, eventually becomes the defining style of his entire career.

As a young poet in the early 1940s, Dotremont becomes involved with the Surrealist movement, with the aim “to reveal the many facets of art”. With the Surrealists, he discovers an artistic form, which does not allow itself to be controlled by common divisions between the arts, but rather encourages the freedom to experiment with words, images and concepts, inquisitively and vividly examining art as a concept. 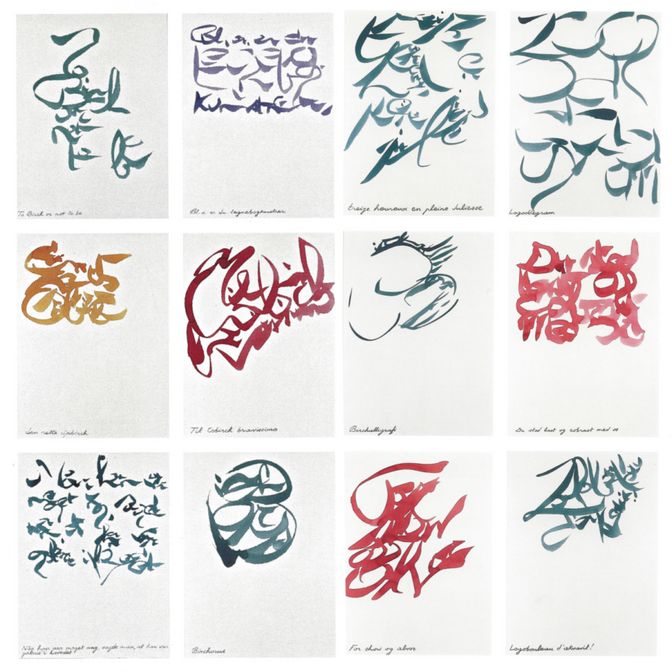 In the work of Dotremont, words always play the most central part. Dotremont develops a style of writing or system of symbols called “logograms”, defined as something between images and words. The logograms appear as beautiful and ornate patterns, leading our thoughts to calligraphy or Arabic scripture. Dotremont painted these “pictures of words, and words of pictures” throughout his entire life. Often, he would accompany them with a short note beneath the image, which translated the logogram into a readable text. Such notes were often brief, poetic and with a humorist point.

One of Dotremont’s works, exhibited at the legendary group show Art is better than Gold, held in Galerie Birch, 1977.

TO BIRCH OR NOT TO BE

It is Asger Jorn who introduces Dotremont to Galerie Birch, led by the charismatic art dealer and founder of the gallery, Børge Birch. Dotremont quickly becomes a personal friend of Birch and many years later, long after the dissolution of the CoBrA group, he continued to keep a close contact with the gallery in Copenhagen. When Birch celebrates his 75th birthday, Dotremont offers him 14 of his famous logograms. All 14 works were specially made and dedicated to Birch, each bearing humorous titles such as “To Birch or Not to Be” and “Birchalligrafi”.

The Belgian painter and poet Christian Dotremont plays a central role in the formation and impact of the CoBrA movement. When Dotremont meets Asger Jorn in the 1940s, he finally meets his match. Asger Jorn has made his way to Europe in order to find like-minded people, and in Belgium he meets several of the individuals who are later to play a defining role in the birth of the CoBrA community.

Furthermore, Dotremont has a deep passion for writing which Jorn has already begun to experiment with. The two join forces through a shared passion for promoting a new, unified, international language of artistic expression. Together they form the art movement CoBrA. An important part of the establishment and global reach of the group is the shared project of the group’s own journal of the same name.

Along with Pierre Alechinsky, Dotremont and Jorn establish the CoBrA movement in Paris in 1948. In the little Café de Flore, they sign the group manifest which is to be the start of three years of a mutually rewarding collaboration, lively discussions and several internal scandals. Despite the brevity of the CoBrA group’s life span, its’ community was at the heart of the movement, not only in its influence on contemporary art of the time but also in the renewal of artistic modes of expression which has continued to influence art to this day.

CoBrA broadly refers to the artworks which the members of the group created between the 50s and the 70s. When Dotremont enters the CoBrA movement, he does so with complete dedication and an unremitting energy. It seems only natural for Dotremont to be the driving force of the publication of the CoBrA journal. Dotremont is omnipresent within the movement and together with Jorn, he is undoubtedly amongst the most active group members. In addition to arranging all the group’s exhibitions, Dotremont is also the organiser and coordinator and even finds funding solutions for the journal. Dotremont has a forceful and progressive personality, but his strong opinions cause quite a scandal at the Stedelijk museum in Holland in 1949. On the occasion of a group exhibition, Dotremont hijacks the attention of the spectators by making a lengthy political speech in favour of communism: the Dutch supporters are instantly provoked by this tirade in what for them is an unfamiliar language. Minor disruptions and heckling escalate into a full-blown physical brawl. Several members of the CoBrA group withdraw from the movement after Dotremont’s performance.

Clashes and disputes such as this inevitably cause the group to dissolve in 1951. Aside from their disagreements, the group is also burdened by great financial problems and serious illness. Living conditions are harsh for the artists due to the poor economy, and before the group’s final break, Asger Jorn is committed to the Silkeborg sanitarium with tuberculosis. When Dotremont pays his friend a visit, he himself is diagnosed with the same illness and is subsequently committed to the same ward. The two artists are placed in beds next to each other, where they would lie for many months. From each their sick bed many collaborative works are created, often with ironic and humorous commentaries to their miserable situation. Their friendship is put to a hard test, and one day Dotremont simply disappears! Christian Dotremont survives his illness and continues to create art while keeping in touch with several of the remaining CoBrA artists.