Egill Jacobsen grows up in a typical middle-class home. His father paints in his spare moments, much to the amusement to the rest of the family, which definitely does not strengthen the idea of art as a realistic way of living. The young Egill attains a reasonable apprenticeship as a tailor, which he quits a short period of time afterwards to attend the Royal Academy of Arts private painting school from 1932-1933. The lack of support from his family is compensated from the painter and teacher Kræsten Iversens encouraging claim that the only thing Egill was able to become was a painter! Jacobsen shortly after debuts at the “Kunstnernes Efterårsudstilling” in 1932. 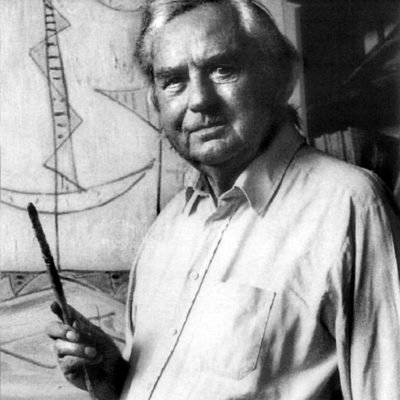 In 1934 Jacobsen travels to Paris where he for the first time encounters the European modernists; Matisse, Picasso, Léger and Miro. A personal meeting with Picasso makes a strong impression on him and he starts to have an interest in primitivistic ethnographical art, which also becomes a popular source of his inspiration for his concurrent colleagues. Inspired by the African mask’s naïve depiction of the human, he paints his first mask-paintings which are characterised by simplicity and colourism. In 1937 Jacobsen exhibits together with the art collective “Linien” at the “Kunstnernes Efterårsudstilling.”

Egill Jacobsen belongs to the group of artists who in the beginning of World War II published “Helhesten”, a magazine for what they at the time called ‘degenerated art’. The group consists of the artists Ejler Bille, Henry Heerup, Asger Jorn, Carl-Henning Pedersen and a selection of poets, film instructors, ethnographers and archeologists. With “Helhesten” an art movement is created, that after the end of the war enters the international art scene through the magazine CoBrA.

The central piece “Ophobning” from 1938 marks a stylistic break-through and is created during an escalating political climate in Europe. In 1938 Czechoslovakia was forced to surrender big areas of land to the heavily armed Nazi Germany. As with many of his artist friends, Jacobsen gets deeply engaged in the political left wing. First of all, the artwork is more characterised by a higher level of abstraction and drama than his earlier paintings, as a result of the periods insecure atmosphere. Egill Jacobsens says about the artwork that it is “painted on the tip of his nerve endings.”

At the same time, he attends psychoanalyst Sigurd Næsgaard lectures about the subconscious. Næsgaards aim is to teach the young surrealistic artists about psychoanalysis by analysing their works for phallus symbols and Oedipus complexes. Despite his often unbalanced approach to the artworks, he showed a rare and sincere interest not only in the new art movement but also in the artists themselves. At his lectures he praises the natural, primitive human being, which greatly appeals to the new group of artists who together with the periods new dogma and inspirational sources tries to break free from the established, academic ideal of art.

In 1952 he gets his first solo-exhibition at Galerie Birch. The critically acclaimed exhibition becomes a great success, which was sorely needed after a period characterised by a bohemian minimum-wage lifestyle. The art critics declares him to be the “Master of the Masks” and Børge Birch and Egill Jacobsens remain in contact with each other for many years to follow, which is also marked by more solo-exhibitions at the gallery.

In 1963 Forlaget Munksgaard publishes a book on Egill Jacobsen (Danske Nutidskunstnere Bd. IV, 1963) with a text written by the CoBrA artist Christian Dotremont. At a meeting in 1972 he gives Børge Birch a copy with the following dedication, referring to the great CoBrA exhibition in Bergen:

“Dear Børge! Thank you for your inspiration. It was a special experience for me to see you put the CoBrA-exhibition in Bergen in place. It occurred to me, what great understanding you have of the pictures. Your devoted Egill”

Since the early days of “Helhesten” the mask has dominated Egill Jacobsen’s paintings. His mask-paintings reflects in colour and contour what is the focal point for his attention, and his paintings can be interpreted in a highly biographical manner. The dark and dramatic paintings are created in periods of personal or social crisis, and the light and easy compositions reflects a cheerful mind. His persona is often characterised by his tremendous joy of creation and his appetite for life.

In 1959 Egill Jacobsen is appointed the first abstract artist to become a professor at the Royal Academy of Art in Copenhagen. Jacobsen’s coloristic joy becomes great inspiration for the young painters he later teaches at the academy, and of his students Galerie Birch can present several impressive works by the modern landscape-painter Gunnar Møller.