During the war he worked together with painters like Asger Jorn, Carl-Henning Pedersen and Egill Jacobsen, who grouped together around the journal “Helhesten”.

In his early artistic period he creates big, heavy stone sculptures, which he names ”Fabeldyr”, which in Danish means mythical creatures. It is this myth-bearing tale in the art, which connects him with the artists that later will join the CoBrA-movement.

However, Robert Jacobsen chooses another path to lead him on the path to the international art scene: he participates in an international community in the artist house in Suresnes in France, to where he travels with his friend, the painter Richard Mortensen. The pair share the same approach to art, based in the nonfigurative style. The craftsmanship tradition that Robert Jacobsen dedicates himself to is close to Pevsner, Alexander Calder and Julio Gonzales. The artist Deyrolle and Robert Jacobsen follow each other closely and later both teach at the Art Academy in Munich. 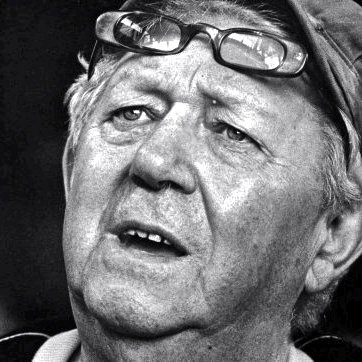 In 1947 Robert Jacobsen travels to Paris. His aim is to explore the gaps in the stone sculpture, but the material limits the process, and as time goes by he finds it necessary to replace the material. Robert Jacobsen replaces the chisel with the welding machine and stone with iron. Using a material like iron, he can pursue his dream of the space in the sculpture and push it to its limit, such as when he makes the voids become the starting point in his works. With the new material, he creates a rhythmic elegance in his sculptures, where the line and the form are spontaneously connected while at the same time being in perfect harmony with each other. Robert Jacobsen was also inspired by his concurrent international colleagues such as Antonie Pevsner, Vasarely, Dewasne and Deyrolle, a group he later becomes part of when he gets involved with Galerie Denise René in Paris.

Robert Jacobsen’s sculptures are always easy to recognise, perhaps because of his working method. He doesn’t follow particular sketches or pre-determined ideas; the sculpture is first created in the very making of its design. The process and moment of concrete creation which occurs spontaneously and without a sense of control, is the very foundation of his sculptures. Hereby Robert Jacobsen establishes his artistic features in the spontaneous spacious constructions, in which he transforms the solid material and almost defies the perception of gravity in his liberated constructions.

In the late 1940s Robert Jacobsen creates a group of sculptures which he calls “The Dolls” (in Danish, “Dukkerne”). The works are initially placed in the homes of families and friends. The series is first exhibited in Paris in 1957, where it receives the following praising words from the critic Walter Schwartz: “Robert Jacobsen’s exhibition which opened a few days ago at Galerie France in Rue Faubourg Saint Honoré has become the sensation of the season, it is definitely a fact, which shouldn’t be withheld from the Danish readers, so one can make of it what you want. People are flocking to the exhibition. The day after the opening the French magazines had already published illustrated articles mentioning the exhibition, with promises of later detailed analyses. Here they speak of the strange formerly abstract artist whose mood, knowledge of life and irony has found new expressions in figures – dolls he calls them – which not only shows the man himself from a new perspective, but also challenges the perception that contemporary art is stagnating in formulas. What hasn’t occurred in a long time at a Parisian gallery opening happened the other day at Galerie France: the audience was moved, amazed, and with a smile on their faces. The following day, the magazine Lettres Francaises wrote: “His exhibition is a collection of masterpieces. This sculptor, who dares to work with the simplest of materials: iron pipes, gears, forks, spoons and bicycle chains, draw the broadest conclusions of the human urge to deal with puppets, a very modern craving for the moment, without lessening his mood and originality and without concealing the sharpness.”

Robert Jacobsen’s black painted sculptures in iron receives a warm welcome not only at Galerie Denise in 1950, but also with art dealer Børge Birch in 1951, where he exhibits the sculptures for the first time.

In 1955 Robert Jacobsen has attained significant international recognition and he is celebrated with an overwhelming retrospective solo exhibition at the highly acclaimed Stedeliik Museum in Amsterdam.

Today Robert Jacobsen’s sculptures are represented at all international museums of modern art.

THE WAR AND ART

With his concrete iron sculptures, Robert Jacobsen makes a name for himself in society’s aesthetic narrative, which through a simplified and contrast determined design language, reflects the time around World War II. The wars destroying character has left the world in ruins. The reaction to this branches in two artistic directions in the post-war period. The abstract expressionism, which takes its outset in emotional events, and the concrete constructionism, which is based in the colour, the line and the space. Robert Jacobsen belongs to the concrete constructionism where the aim is to create a precise depiction of the interior space, and to create rhythm and movement in the lines of the form. The concrete sculpture is a liberation from all emotional and literary associations and exists only as pure form.

As the artist says himself: “For the new movement of constructionism, the goal was to create figures that was as abstract as possible. You weren’t supposed to be able to find an eye, an arm or a leg in our works (…) The sculptures were to be cleaned of literature and only exists as form and space. I chose to emphasise on the limitations and possibilities of the space and give it a clear underlining.

The concrete form opposes the Romantic movement and the concurrent abstract expressionism. The Constructionists wants to start over, with the construction as its foundation. The abstract and concrete expressions are considered to reflect how the post-war period was characterised by lost dreams and lives. About his working method, Robert Jacobsen says: “I work in a discussion between what I am able to do, and what I am not – the challenge and inspirations lies within what I cannot. The objects must be new to yourself."

At Galerie Birch’s exhibition in 1984, Robert Jacobsen’s son, Bobby, writes about his father’s art. This naive and very loving interpretation of his fathers works, is perfect at describing the way which we are moved by Robert Jacobsen’s sculptures:  “Some times I don’t really understand what he is saying with his artworks, because he is so diverse. Then I need to use my imagination. Eventually I have been a part of it for so many years, that I better understand his meanings. I frequently ask him, and then he does his best to answer me. But I don’t understand his answers every time, because art isn’t always so easy to explain. “