Pinot Gallizio is born in Alba, in the Italian region of Piemonte, in 1902. Following his university studies in Torino, Gallizio completes his degree in Chemistry and shortly after opens his own pharmacy in his hometown. At the same time, Gallizio possesses a natural interest in the culture and traditions of the region, and in particular in the town of Alba, in which he has settled himself with his family.

During an exhibition and conference in Torino he meets the young painter Piero Simondo. Gallizio and Simondo quickly become friends and, when Simondo also moves to Alba, a close partnership is formed. This friendship turns out to be the starting point of Gallizio’s journey into the art world.

Pinot Gallizio pursues an education in Chemical Science at the Faculty of Chemistry and Pharmacy in Torino and becomes a pharmacist. Aside from his profession, Gallizio nurtures a great passion for culture, where archeology has a central role. It is not until 1953, however, that he starts his artistic research, experimenting with resins and other materials after meeting a young artist from Torino called Piero Simondo. It is Simondo who introduces him to Modern Art. 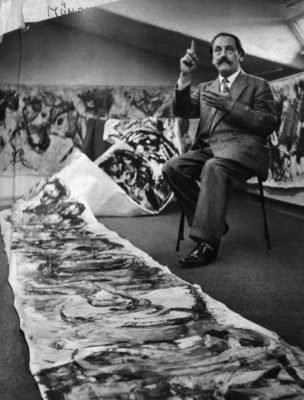 Gallizio and Jorn at Jorns Studio at Abisola

A PIONEER OF HAPPENINGS AND ENVIROMENTAL ARTS

The chance encounter with Simondo inspires Pinot Gallizio to further explore art with the same curiosity he has for his own metier. With great enthusiasm, Gallizio creates paintings by combining his scientific interest with his newly found love of art.

In this atmosphere of ample experimentation, Gallizio is able to invent and create works of art that can be considered precursors to the artistic happenings and environmental art of the 1960s and 1970s. Gallizio’s experimentations mark a historical shift in art, where the traditional concepts of painting and sculpture are explored. Furthermore, these experiments have contributed to our understanding of what art is and what it can achieve.

Pinot Gallizio can be linked to the CoBrA movement through his meeting with Asger Jorn, with whom he works closely from 1955. Years later, he joins Jorn in the art movement called International Movement for an Imaginist Bauhaus (‘Movimento Internazionale per una Bauhaus Immaginista’, MIBI).

In 1953 Gallizio forms the workshop ‘The Chemical Plant’ where he performs one of his first experiments by painting with natural resin. In other words, he starts to experiment with painting using natural resins and other natural materials in his palette of colours. It is interesting to remark that although Gallizio is a trained chemist, and therefore familiar with chemical compounds, in his art he favours natural substances.

Encouraged by artists Antonio Siri, Gigi Caldanzano and Leandro Sciutto, whom Gallizio meets during the Truffle fair in Alba, Gallizio travels to Albisola with Piero Simondo. Here he exhibits his first real work at the Restaurant Lalla, in connection with the international artist conference in Albisola which is arranged by Asger Jorn.

In Albisola, Gallizio meets several Italian and international artists. Together with Jorn and Simondo, Gallizio forms and becomes the leader of “The Experimental Laboratory”, an institute of anti-science and free artistic experimentation. Here they develop their shared interest in cultural and political provocation. Through several workshops they create a community, which later includes many avant-garde artists such as Enrico Baj, Karel Appel and the urban artist Constant. Today the art movement represents the total rejection of functionalist architecture and social rationalism. This Laboratory represents an extension of the Mouvement Internationale pour un Bauhaus Imaginiste, founded by Jorn in 1953 against the Bauhaus of Max Bill of 1953.

The name “Experimental Laboratory” shows how Gallizio’s scientific work is linked to his art. It defines a working space and a cognitive attitude favouring applied research. In addition to his work with chemicals and scientific research, he will apply the same principle to his art, with industrial painting and ensemble painting. In other words, the role of the “Experimental Laboratory” is to integrate the scientific with the artistic methods and to replace teaching with experimental activity. Welders, dust, and resin are the means that testify to the fusion of the collective laboratory with the artistic atelier.

COLLABORATION WITH GUY DEBORD AND BAUHAUS

In 1956 Gallizio participates in two group exhibitions in Alba as a result of Jorn’s commune of artists in Albisola the previous year. The first exhibition is a retrospective collection of futuristic ceramic work from the years 1925-1933, and is held at the city’s town hall. The second exhibition shows works created in the “Experimental Laboratory”, held at the Theatre-Cinema.

Between the 10th and the 15th of December, the International Movement for an Imaginist Bauhaus (a manifest for the advantage of the urbanizing unit) announces an artistic manifestation at the Cultural Union in Torino, with several conferences and exhibitions on the program. Artists Gallizio, Franco Garelli, Sandro Cherchi, Asger Jorn, Constant and Piero Simondo are all gathered at the event. This is where Gallizio meets Guy-Ernest Debord, and signifies the beginning of a close partnership between the two.

On the 28th of July 1957 Gallizio and Jorn, along with Guy-Ernest Debord, Walter Olmo, Piero Simondo, Elena Verrone and Ralph Rumney, meet in Cosio d’Arroscia (near Imperia, in the Italian region of Liguria) and start the “Situationist International”. The SI is a radical organisation, with Marxist and surrealist origins, active between the 1957 and the 1972 and its members are mainly concerned with promoting action, which essentially consisted in creating projects and issuing publications. Initially, SI members use art as a means of criticising culture and society, while later on the SI becomes more and more a politically-focused organisation.

In 1958 Gallizio displays his industrial painting works with a solo exhibition at Galleria Notizie of Torino. The show is later hosted by Galerie Van de Loo in Munich.

The industrial nature of Gallizio’s paintings is shown in the elaboration of mechanisms of repetition and multiplication with which Gallizio undermines the principles of the uniqueness of gesture, experimented first with the monotype and then with peinture d’ensemble, collective painting. The work “Cave of the anti-matter” (Caverna dell’antimateria) is presented in May at Galerie Drouin in Paris in 1959, which represents one of Gallizio’s best examples of collective work, created alongside his son Giors and Debord.

In 1960 a very large work on canvas by Gallizio is presented before a massive audience in Amsterdam. This was arranged by the director of the legendary Stedelijk Museum. Gallizio’s paintings are also exhibited at Palazzo Grassi in Venice, together with works by Dubuffet, Lucio Fontana, Henry Heerup, Germanie Richier and Teshigahara. The same year Gallizio shows two pieces “La Gibigianna” and “Il Zampio die Miscredenti” at the well-known Galleria Notizie.

In March 1961, Gallizio travels to Copenhagen to work on the pieces which are going to be exhibited in Galerie Birch at the exhibition “PINOT AU PAYS DES VIKINGS / PINOT I VIKINGERNES LAND” (Pinot in the land of Vikings). The exhibition catalogue is prefaced by P.V. Glob, who writes: “1000 years ago, the Vikings ravaged the countries of the South. Today, we bid an artist from Italy, Pinot Gallizio, welcome to the North.”

At this exhibition, the following paintings were presented to an audience for the first time: Viking’s Heaven (Vikingernes Himlen), Tribute to a Viking (Hyldest til en Viking), Tribute to Louisiana (Hyldest til Louisiana), Viking Raid (Vikingetogt), Victor (Sejrherre), Towards the Light (Imod Lyset). In the exhibition catalogue, museum director of the Stedelijk Museum W. Sandberg writes enthusiastically about his first personal meeting with the artist and his works: “What is now some weeks ago, I was given the opportunity to visit Alba and see both the painter and artworks in their natural surroundings. This was quite a shock, as the same fiery vitality coming from this man, at first glance also appeared to be the definitive quality within the works. I had the impression, that the strong feelings stirring within this man, were completely and utterly transferred onto the canvas in such a direct way, that nothing separates the artist from the painting: neither in intent, technique or thought on a future viewer, which so often destroys the purity of inspiration in other artists. The artist and painting become one.”

Together with his Danish gallerist, Pinot Gallizio explores Denmark in the same way that Asger Jorn explores Italy. Robert Dahlmann Olsen writes: “What Asger Jorn has given to Italy, Gallizio is trying to give back to Denmark. None of them have hidden ties or identities, so let them add or take away – we sense the platonic quality of irony.”

In this way, he elaborates on the artistic connections between Denmark and Italy, directly caused by Jorn, and that are carried into Galerie Birch as early as the beginning of the 1960s.