Uffe Christoffersen was educated at the Art Academy of Copenhagen as a student of the Danish mask painter Egill Jacobsen, who is known as part of the CoBrA group. Christoffersen himself has been a member of the expressive and energy-filled Danish art association Corner. Uffe Christoffersen has since 1990 lived and worked in the South of France together with his wife, the art painter Annette Hoff-Jensen. 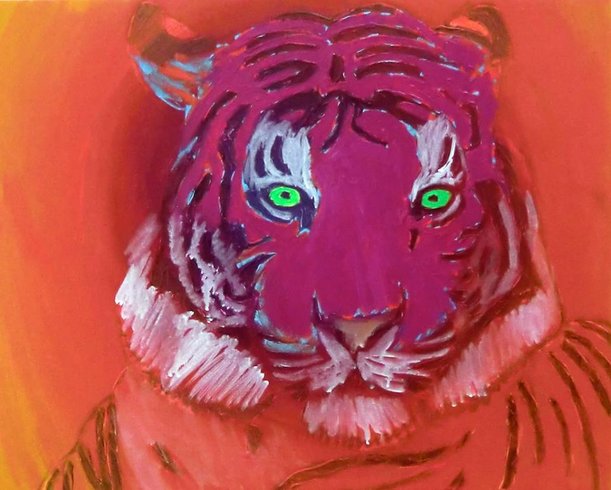 THE TIGER AS THE MOTIF

Uffe Christoffersen’s favorite motif is the tiger in all its’ shapes and sizes: from jumping to lying, from roaring to watching. His biggest weapon is the colour and here he is scientific in his passion. His style is reckless, colour happy and a charming form of new-expressionism. Uffe Christoffersen has a spontaneous and energetic happiness for painting, which has not been seen since the CoBrA artists turned everything upside down.

Even through Uffe Christoffersen has become almost synonym with his colourful studies of the tiger, his own connection with this fascinating predator is not the actual force behind his works. According to the artist himself, the motif has never been an essential part for a good painter:

”The most important thing is the painting, because when you are exploring the subject carefully,  trying many times, then it also influences the final result… My theory is that all your life you can paint a glass of water that stands on the table. One of the reasons is that is is very difficult and complicated to paint, that there are so many precautions to take, before the painting becomes good…”

Uffe Christoffersen becomes fascinated by big cats early on in his life when he lives in Africa with his family. Here he describes his first meeting with the predators:

“When I was a child, I lived for some time in Kenya. My family and I lived in a newly built villa with a big garden. I was about eight at the time, and I found the garden very exciting, especially late in the day, when the deep African dark lowers itself, and the moon shines between the trees and bushes. It made uncertain shadows which lurked in many corners, and often I would seen jackals and leopards lurking around. Drums could be heard from the surrounding villages, and in the tropical night was the sound of the drums mixed with the hyenas howling and the roaring of the lions".

“Out on the plains lived zebras, antelopes and elephants and far away you could see the violet mountain chain, Ngong Hills. The school I went too was about nine kilometers away. The buses were very irregular, so I would often ride my bike to school. One early morning, when I had to cross the street in the middle of the jungle, there was a large female lion standing about 25 meters ahead of me, and was in my way. Next to the lion was a pair of young children that were running around playing. I stopped, and carefully got off my bike, while I tried to figure out how to get around this difficult hurdle. I did not realise that I was in a very dangerous situation, and there was a great risk that the lion would attack me. I was more worried about getting to school late, and was more afraid of the teacher than the lion. Now the lion was standing there, huge, facing me, and was starring at me with it’s yellow/brown eyes. How much time passed I cannot say, but it felt like eternity. Suddenly the spell was broken, and the lion jumped out into the bushes and disappeared into the forest. The young ones playfully followed. A long time passed before I could seriously use the strong expressions which the time in Africa gave me, but I believe they were part of why I became interested in the large predators. There was for me, no speak of childhood dreams that had to be achieved through life, but real events and impressions that had to be worked and put into paintings.”

Ever since then Uffe Christoffersen has not needed a motif for his expressive and experimental paintings. And throughout his career the tiger motif has been explored and refined over and over again.

MEMBER OF THE VIOLET SUN

The art association Violet Sun is characterised by the artist’s expressive paintings and massive use of colours. The group’s preserved knowledge of the universe of colour is obviously reflected in their choice of it’s name: Violet Sun. In the practice of colours exists the concept of complementary colours; violet and yellow are complementary colours to each other, which means that these two colours achieve the best in each other. Violet Sun works this way almost scientifically with its colours despite the fact that their work appears free and expressive.

The Danish art historian Thomas Kappel says the following about the common artists features: “In the group thrives also an interest for expressionism, not at least it’s unique Nordic expression from Edvard Munch, Emil Nolde and Cael Frederik Hill, together with its abstract branch, along with the CoBrA artists whom along with Asger Jorn is one of the most important.”

As one of the most significant and exciting groups of Danish artists in the 1970s and 80s, Børge Birch had an eye on the Violet Sun’s members from early on. His attention was initially directed at the charismatic painter Gunnar Møller, but Anette Birch inviteed Uffe Christoffersen in 1990 to participate in a group exhibition and since then Uffe Christoffersen has been connected to Galerie Birch.